What are the changes in my body during pregnancy? 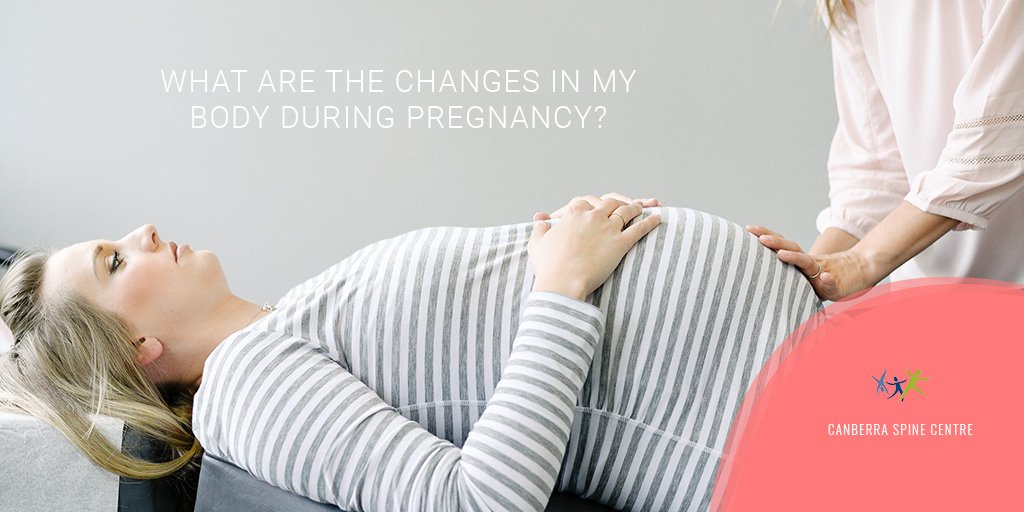 A myriad of changes.

Changes in your body during pregnancy come in a variety of ways. As the tiny life grows inside your body, extra weight gain occurs. This comes not just from the growing baby, but that of the uterus, amniotic fluid, extra blood volume and often extra fat and muscle gained during the pregnancy. Did you know that your uterus will expand by 50 times its original size? This occurs partly due to a hormone produced during your pregnancy called relaxin. Total weight gain during pregnancy can be anywhere between 7 – 18 kg, depending upon your starting weight. This new weight and distribution alters the mechanics of your body, putting more pressure on your pelvic joints and lumbar spine, especially.

Changing hormones bring on a diverse array of changes in your pregnant body. Morning sickness may be one of the most obvious. Two thirds of women will experience morning sickness, most likely in the first trimester. This is most likely due to increased levels of hormones, especially estrogen.

Other common signs and symptoms associated with hormonal change are: breast enlargement and tenderness; changes in brain function and mood; circulatory changes such as varicose veins; and increased thickness of hair and nails. Don’t discount the effect of pregnancy on your brain. Among other things, you are preparing to take care of another human being and all that entails. Having others around you to offer support during this time can be valuable.
Changes related to your increased size and blood volume are common: tiredness; discomfort and difficulty sleeping; less room in your torso making breathing and digestion less comfortable; and increased heart rate and blood pressure are common.

The effects of Relaxin.

Adding to the effects of weight gain, the hormone relaxin affects the entire body. Relaxin has many effects related to the uterus and placenta, as well as the cardiovascular system. Perhaps what it is most known for is the softening effects on the ligaments and connective tissues of the body, allowing for the growth of your uterus and baby as well as creating more flexibility of the tissues for childbirth. This flexibility occurs throughout your entire body, however, and the extra pliability of your tissues can make you more prone to injury. A common problem in pregnant women with pelvic laxity is symphasis pubis syndrome, creating often severe tenderness in the front of the pelvic area especially, and often pain and difficulty with movement. At Canberra Spine Centre, we help many women with this particular problem using special techniques, exercises and sometimes supporting belts to help maintain proper alignment and stability of the pelvis to help these women become much more comfortable.

Relaxin is released in peak amounts in your body between week 10-17 but is present in your body until after your bubba is 6 months old. That’s one of the reasons why it’s important not to rush back into heavy weight-bearing exercise within your first few months after childbirth. Your body will often still be prone to the effects of raised levels of relaxin, making it susceptible to injury with this type of exercise. Walking is often your best friend after childbirth.