The Role of Vitamin D in Maintaining Good Health 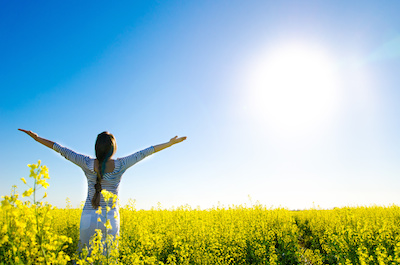 In my last article, I discussed the idea of re-assessing your amounts of sun exposure as a way of improving your vitamin D levels. Excess sun exposure was found in some studies to produce more skin cancer, but reduce your risk of death from other causes by a significantly greater amount.

In this article, I’d like to go into more detail in the following areas:

1. The role of vitamin D in maintaining good health.

2. What happens when you are deficient in Vitamin D.

The Role of Vitamin D in Maintaining Good Health

Vitamin D is a genetic requirement for human health and wellbeing. Initially thought to only play a role in calcium metabolism, and thus bone formation, researches in recent years have discovered many other roles that vitamin D plays in our health.

In fact, many of the body’s tissues have vitamin D receptors – proteins – that bind to vitamin D. They are found in the intestines, the prostate, the heart, blood vessels, muscles and endocrine glands (these secrete hormones into our blood stream). This points clearly to a role for Vitamin D to play throughout the body, for a variety of bodily functions.

The state of our immune system is influenced by two main factors – environmental stressors and nutrition. Environmental stressors such as physical stress (eg. Prolonged poor posture), emotional stress (eg. Work deadlines, financial stress), or chemical stress (eg. Excess consumption of stimulants such as caffeine or alcohol) will cause down-regulation of immune function via increased action of the sympathetic nervous system and an increase in stress hormones (cortisol and adrenaline).

This explains why people tend to get sick when they are ‘stressed’. The part of our immune system that is genetically programmed to respond to bacteria, viruses, and other invading organisms uses ‘effectors’ – molecules that are genetically coded to respond to the invaders. Antimicrobial peptides, or AMPs, are the most studied of these effectors. They attack invaders, trigger tissue repair and activate the acquired immune system (the bit that creates antibodies after exposure to an antigen).

Vitamin D up-regulates the expression of AMPs in the immune cells. Vitamin D also regulates the inflammatory response, as well as enhancing the capacity of the epithelium (layers of cells that line hollow organs and glands, as well as those that make up the outer surface of the body) to produce its own antibiotics. Vitamin D has anticoagulant and anti-inflammatory properties, and thus plays a large part in maintaining proper circulatory function.

What happens when you are deficient in Vitamin D.

However, deficiency over long periods will result in poor health. How that poor heath expresses in each individual will vary. Vitamin D deficiency has been associated with increased incidence of multiple sclerosis; cardiovascular disease, including coronary artery disease, stroke and congestive heart failure; diabetes and poor neuromuscular function (associated with falls).

Vitamin D deficiency also leads to decreased immune function, which is associated with an increased incidence of a range of cancers including colon, breast and prostate cancer, as well as increased susceptibility to colds and flus and unexplained diffuse muscle and bone aches. There is much research now pointing to the role that deficiency in Vitamin D may play in the triple current childhood epidemic of autism, asthma, and autoimmune diabetes.

Cleary, Vitamin D has a huge role to play in our health – much more so than was thought only a decade or two ago.

The next questions to answer are:

1. How to become sufficient in Vitamin D?

I look forward to discussing these with you in my next article.